Especially in high-stress situation, it is essential for imaging elements in the OR to be straightforward, fast and uncluttered so that medical personnel are not distracted from complicated interventions by the technology. “In our old operating rooms, handling the OR towers was often difficult, which is why we wanted to modernize our video systems alongside our new OR construction,” said Peter Palombo, Technical Director of Dornbirn Hospital. “It was very important for us to acquire a system which is intuitive to operate, offers an optimal screen layout and straightforward system configuration.”

With this in mind, Dornbirn Hospital released a top bidder tender for a new imaging system in the summer of 2017. Over the following weeks, various concepts from different bidders were presented at Dornbirn Hospital, with the most convincing one being the comprehensive EIZO package with the CuratOR Surgical Panels. The first phase of construction included the completion of four operating rooms, which successfully took up service in December 2018. The second construction phase for the remaining three ORs is scheduled for mid 2019.

At the heart of the new imaging system in each operating room are the type SP1-24 and SP2-46T-24 Surgical Panels. The SP1-24 forms the central control unit on a 24" screen. “During development of the user interface, we always focus on particularly easy handling for OR personnel and ensure to fulfill the exact requirements of the user,” explained Matthias Lubkowitz, Vice President of the OR Solutions department at EIZO GmbH. “Third-party software integration is also possible thanks to our compatible system. We adapt to the hospital's workflow, not the other way around.” For example, EIZO supports common hospital standards such as DICOM and HL7, but can also easily configure and customize the required data elements for the hospital. This means that hospital-specific applications can even be quickly integrated directly on site.

With the SP1-24 at the center, the system is completed by two type SP2-46T-24 screens measuring 46" and 24". The screens are designed as glass-fronted image viewing systems which are flush-mounted in the glass walls of the rooms and display both videos and images. The 46" display is equipped with an optional intuitive touch control, which is ideally suited for displaying images and video streams during surgery thanks to its generous size. The visual data can come from different sources at the same time. “A particularly user-friendly feature is the fully automated export of image data to our archiving system,” said Palombo. “The menu navigation is designed to be highly intuitive, meaning that our personnel can concentrate fully on the intervention without being distracted by technological obstacles.” The system even allows for direct access to and display of data from the hospital’s central PACS and HIS. This ensures that OR personnel have access to all critical information at all times. 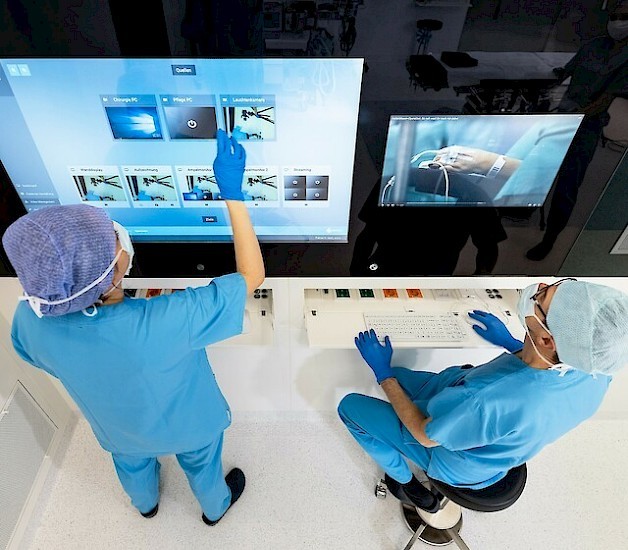 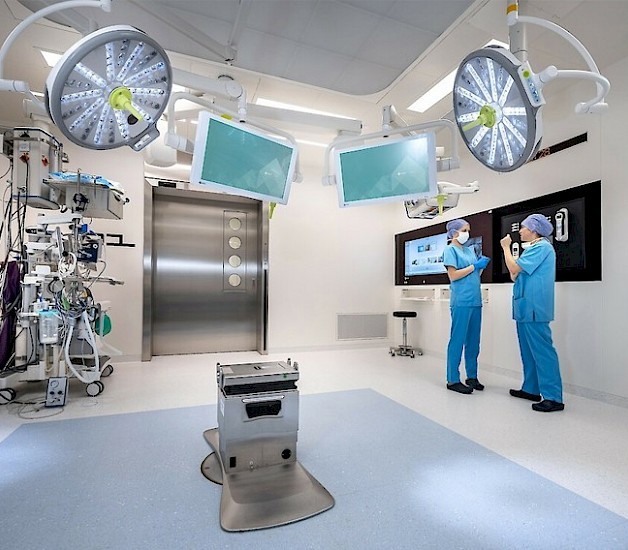 “Our staff is extremely enthusiastic about the video systems”

EIZO uses Video-over-IP technology for fast transmission of video data in real time. This makes it possible to transmit the enormous quantities of data inherent in full HD and 4K video signals without delay or compression. To achieve this, fiber optic cables were installed, which will in future be able to transmit even higher resolutions such as 8K and 16K. However, laying these cables posed a significant challenge. “Fiber optic cables are made of glass. In operating rooms, they are often located in moveable media supply units – for example on the ceiling. This means that special attention must be paid to the risk of cable breakage,” explained Lubkowitz. “Thankfully, our on-site partner Sanova has extensive experience in laying fiber optic cables and took on the challenging task.”

Another challenge for the installation of the video system is posed by the incorporation of third-party hardware, such as internal hospital network switches. “The flexibility of our project management makes it possible to adapt to customer-specific requirements and previously undefined interfaces,” said Lubkowitz. “We were therefore able to quickly incorporate all existing components - from C-arm to endoscope to mobile OR tools. Our user-friendly system also allows for subsequent integration of new components via plug-and-play.” The in-house software CuratOR Caliop functions as the superordinate control system for the Video-over-IP solution with CuratOR Alipe. For data security reasons, the video signal is only processed within a closed network in each operating room. Once approved by the personnel responsible, the data can be encrypted and transmitted to external recipients – for example another operating room or a conference room.

The software for efficient OR integration.